Sitting on the corner of Canal and Carter Roads in Cleveland, Ohio is a vacant building towered over by modern buildings. It was once a depot for the Baltimore & Ohio Railroad built in 1898 and was in service until 1934 when the B&O moved passenger service into the Cleveland Union Terminal. Sherwin Williams purchased the building in 1975 and converted their old paint plant a short distance east of the depot into their Breen Technology Center. There have been multiple attempts to restore the building in the past but none have ever worked out. With Sherwin Williams now planning to move their technology center elsewhere, will the depot be demolished? Or will it hopefully be saved and restored or reutilized for other purposes? Women and Philanthropy: The Monied Women of Cleveland and their Impact
by Dr. Einav Rabinovitch-Fox, Visiting Assistant Professor, Department of History, CWRU
Thursday, December 3, 7pm
The talk will examine the role of the Wade family women and their milieu in shaping the culture of philanthropy and the Settlement Movement in late nineteenth century Cleveland.
The video from the talk is here: Deconstructing the Rockefeller Myth — A Cleveland Perspective
A talk by Dr. John J. Grabowski, Krieger Mueller Associate Professor of Applied History, Case Western Reserve University
Weds October 7 at 7pm via Zoom
John D. Rockefeller, Did He Forget Cleveland? Dr. Grabowski will talk about the various long held beliefs held by many Clevelanders about John D. Rockefeller and whether they are based in truth

Here is the video

TOM MATOWITZ | THURSDAY, MARCH 18, 2021
From Freshwater
The link is here

The Politics of Urban Reform in the Gilded Age and Progressive Era, 1870–1920 Settlement Houses, Changing Neighborhoods, and Adaptation for Survival: An Examination of Merrick House in Cleveland’s Tremont Neighborhood and Its Place in the Wider Context of the Social Reforms of the United States, 1919-1961

by Sara K. Montagno, Case Western Reserve University School of Graduate Studies
The link is here
If above link does not work, try this

Founded in 1919, Merrick House has served the residents of Cleveland’s Tremont neighborhood continuously for one hundred years. Despite the longevity of this settlement house, there has been no substantial scholarly works published on its history. This thesis focuses on contextualizing the founding of Merrick House and its operation over roughly forty years in the same neighborhood within the national settlement movement of the early twentieth century. It also explores the significance of Catholicism within the institution and its close association with the Christ Child Society of Greater Cleveland through the examination of manuscript collections held by the Western Reserve Historical Society as well as a variety of published sources.

My Recollections of Old Cleveland 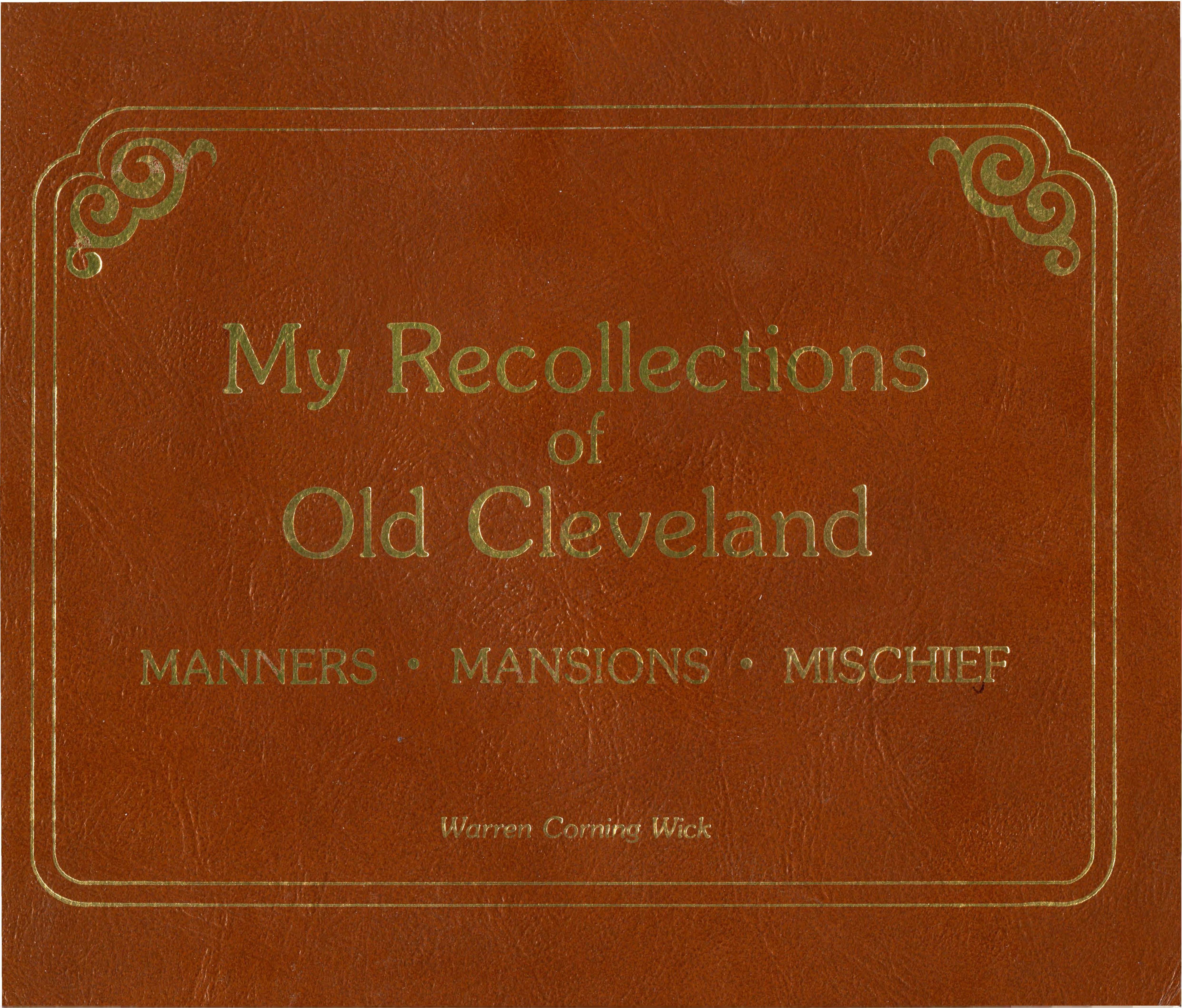 Book Description: My Recollections of Old Cleveland is a first person account of Cleveland’s gilded age by Warren Wick who lived it. My Recollections begins with a brief history of the Wick family coming to Cleveland from Youngstown by wagon in 1847 at a time before there were trains along with the role Wick banking interests played in Cleveland’s growing prosperity.

On this day in 1831, James Garfield, who became the nation’s 20th president in 1881, was born in a log cabin in Orange Township, now Moreland Hills, Ohio, as the youngest of five children. His father, Abram Garfield, died when he was 18 months old. He was reared by his mother, Eliza, who said: “He was the largest babe I had and looked like a red Irishman.”

Garfield later said of his early years: “I lament that I was born to poverty, and in this chaos of childhood, 17 years passed before I caught any inspiration … a precious 17 years when a boy with a father and some wealth might have become fixed in manly ways.”

Eventually, Garfield became a teacher, a language scholar and served as president of Ohio’s Hiram College before entering politics. During the Civil War, he served in the Union Army as a major general. With President Abraham Lincoln’s support, he resigned his commission to make a successful bid in 1862 for a seat in the House of Representatives.

Garfield served in Congress during the Gilded Age. He was implicated in a scandal that erupted in 1872, during the presidency of Ulysses S. Grant. In 1880, he won a Senate seat. By that time, the taint of the scandal had faded.

Sen-elect Garfield attended the 1880 Republican National Convention in Chicago as the campaign manager for John Sherman, a fellow Ohioan and the secretary of the treasury. When neither Sherman nor his major rivals — Grant and James G. Blaine of Maine — failed to garner enough votes to secure the nomination, the delegates on the 36th ballot chose Garfield as a compromise choice. In the ensuing presidential election, Garfield conducted a low-key front porch campaign, defeating Democrat Winfield Scott Hancock of Pennsylvania, another former Civil War general.

During his short time in office, Garfield made several significant diplomatic and judiciary appointments, including a U.S. Supreme Court justice. He enhanced the powers of the presidency when he defied the powerful Sen. Roscoe Conkling (R-N.Y.) by appointing William H. Robertson to the lucrative post of collector of the port of New York, starting a fracas that ended with Robertson’s delayed confirmation and Conkling’s resignation from the Senate.

Garfield advocated advances in agricultural technology, a better educated electorate, and civil rights for African-Americans. He also proposed substantial civil service reforms, eventually passed by Congress in 1883 and signed into law by his successor, Chester A. Arthur, as the Pendleton Civil Service Reform Act.

On July 2, 1881, Charles Guiteau, a lawyer who had unsuccessfully sought a consular post in Paris, shot Garfield in the back as he walked through a railroad station waiting room in Washington, located on the present site of the National Gallery of Art. After lingering for 80 days, he succumbed to his wounds at age 49 and was succeeded by Vice President Arthur.

6. Between Old and New Woman: Flora Stone Mather and the Politics of Gender  By Dr. Einav Rabinovitch-Fox