Moses Cleaveland and his group of surveyors landed at the east bank of the Cuyahoga River in July of 1796. They landed at the foot of what is today St. Clair Avenue and is within 500 feet of present-day Heritage Park I where there is also a replica of Major Lorenzo Carter’s cabin. This area is known by Clevelanders as “The Flats”, so-called because of its topography. 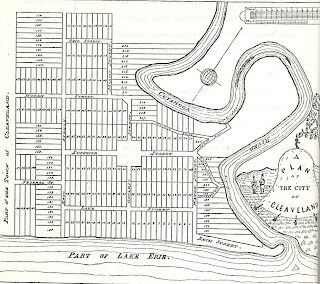 Thousands of years ago, a glacier covered the Cleveland area. This glacier caused the area around the mouth of the river to be very flat. In Orth’s history of Cleveland, he describes Lake Erie as once being 200 feet above its current level and successive levels of beach lines were left as the lake gradually fell and receded. Cliffs of rock surrounded the flat area on the left bank and extended south and east of the city. These cliffs became known as “The Heights”. Above the east bank was a forest of chestnut, oak, walnut, ash, and sugar maples (hence Cleveland’s future nickname of “The Forest City”). The Cuyahoga River curved its way through and there was a large stagnant pond with bad smelling bogs and swampland. “Early Cleveland History” by Whittlesey (p. 33) describes these swampy conditions which caused a lot of illness and death among the early settlers.

And so it was in this low-lying swampy place, with the crooked river flowing through it, surrounded by cliffs and forests, where the first settlement of Cleveland began.

Originally, the colonization of the territory was only intended to be the east bank of the Cuyahoga River. There was already a cabin on the west bank belonging to the North-West Fur Company. In later years, this cabin was moved once and then was torn down in 1922. According to Condon, Cleaveland discovered that the Iroquois controlled the east bank of the river while the Hurons controlled the west bank. Moses Cleaveland encouraged the Iroquois to give up their claim to the land on the east side of the river, and they sold their rights for 500 pounds of New York currency, two cattle, and 100 gallons of whiskey. This left the west bank of the river still controlled by the Hurons.

Traveling with Moses Cleaveland were 6 assistants, 37 employees, and two couples; Elijah and Anna Gunn, and Job and Tabitha Stiles. The assistants were Amos Spafford, John Holley, Richard Stoddard, Moses Warren, Joshua Stow and Theodore Shepard. The Gunns took charge of supplies at Conneaut which was to the east along Lake Erie and the Stiles continued on with Moses. This group built a couple of cabins and began the survey of the township. By October 20, 1796 Moses Cleaveland finished his surveying business and left with his party , leaving behind Job and Tabitha Stiles and a Mr. Landon. Landon soon left also and Edward Paine arrived and took his place. These three spent the winter in a cabin located where W. 6th Street and Superior Avenue are today. Crisfield Johnson designates the Stiles family as the first family who settled in Cleveland.