CLEVELAND, Ohio – Poison gas, machine guns, flame-throwers and rapid-firing artillery were among the new battlefield horrors of World War I, capable of killing and maiming hundreds of thousands of soldiers in a single battle.

Transporting and treating the flood of survivors from this carnage was a nightmare for medical personnel, most of whom who had never handled the type or number of these wounds before.

Cleveland provided a modest but important contribution to confronting this challenge in the form of Dr. George Crile and the Lakeside Unit.

Crile, who would later co-found the Cleveland Clinic, was a surgeon at Lakeside Hospital (now University Hospitals) with a keen sense of scientific curiosity and the ability to tackle medical mysteries.

The Lakeside Unit was formed when Myron Herrick, a Clevelander and ambassador to France when World War I broke out, asked Crile to organize a surgical team to come to France to study medical conditions. A team of volunteer surgeons and nurses was recruited from Lakeside Hospital and spent three months in Paris in 1915, treating more than 1,200 war-wounded patients.

Crile, who served in the U.S. Army Medical Corps during the Spanish-American War, anticipated that America might be drawn into World War I, and devised a plan for mobilization of civilian hospitals for overseas military service.

“His theory was that a unit of medical men should be a group that has worked with each other in the civilian world so that they are a package, a unit that can be picked up in the U.S. and moved overseas . . . hit the ground running and not have any training to worry about once they get there,” said Jennifer Nieves, registrar/archivist at the Dittrick Medical History Center at Case Western Reserve University.

Crile worked with American Red Cross officials on a plan creating 25 units at hospitals across the country that would be able to respond and serve overseas under Army supervision if the U.S. went to war.

“They found out that it was so outdated that some of the things were wrapped in newspaper from the Spanish-American War,” she said. “They were still using things as far back as the Civil War.”

Less than a month after America declared war on Germany in April of 2017, the Lakeside Unit — including 27 medical officers, 64 nurses, and 155 enlisted men — was headed back to France. The unit was designated as Base Hospital No. 4 and took over a former British military hospital (No. 9) in Rouen.

The unit would stay nearly two years, its ranks swelling to 42 physicians, 124 nurses and 356 Army enlisted men, treating more than 83,000 patients from both sides of the war in two hospitals.

Nieves, curator of a Dittrick exhibit (running May through September) about the 1917 experience of the Lakeside Unit, said Crile was “the perfect person to go over there” with the Lakeside Unit.

“He saw it as a living lab,” and an opportunity to further his research in how shock and traumatic injury affects the entire body, she added.

Crile also brought along a few innovations that he helped develop.

He was among the first to use blood transfusions on patients, and taught the French how to use nitrous oxide as an anesthetic that did not leave patients violently ill (like chloroform and ether) when they regained consciousness after surgery.

Crile designed some of his own surgical clamps and forceps, and while overseas discovered that sea water could be used when saline was in short supply to stabilize patients.

Even before the war, “what makes him so fascinating is because he is unconsciously anticipating a modern application of all his surgical techniques that will become critical in treating massive numbers of wounded, particularly wounds coming out of World War I that had never been seen before,” said James Banks, director of the Crile Archive Center for History Education.

The center is a repository of materials about the famous Cleveland surgeon and World War I, located on the west campus of Cuyahoga Community College in Parma (formerly the site of an Army hospital named for Crile during World War II).

Banks said that in touring battlefront aid stations during the war, he was amazed at the number of soldiers who had died without a mark on them. Suspecting that the blast of exploding artillery shells might have been involved, Crile conducted experiments using stray animals.

Part of Dr. George Crile’s work during World War I involved studying the concussive effect of artillery. (AP photo)”Sure enough, if they were in the direct line of a concussive blast, they were killed,” Banks said. 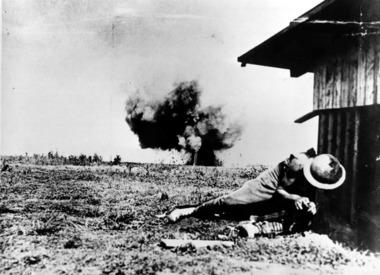 Part of George Crile’s research overseas during World War I was the effects of concussive blasts from artillery shells. (AP photo)

“The essence of George Crile was his insatiable curiosity,” Banks said. Because of it, “he was able to do a number of remarkable things.”

Banks believes that Crile was in his natural element during the war. “It’s the excitement, it’s the fact that this is a whole laboratory of testing the human spirit, its physiological capabilities,” he said.

In Crile’s study of how shock resulting from traumatic injury could cause death, he developed a rubber suit fitted to patients that could be constricted with a bicycle pump to prevent loss of blood pressure, according to Banks.

“He was the first one to recognize the correlation between shock and the lowering of blood pressure,” Banks said.

Crile recognized the importance of transporting wounded soldiers as quickly as possible to medical treatment to gain the upper hand against infection, a scourge of the front. “What he’s really talking about is the ‘golden hour’ (for treatment) now known in emergency medicine,” Banks said. 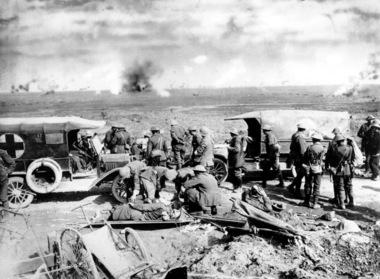 Dr. George Crile recognized the importance of transporting wounded from the front to aid stations or hospitals as quickly as possible to fight infection. (AP Photo)

When a solider got hit, “he’s lying in filth, perhaps for six or seven hours, in the vermin-infested, bacterial-laden soil of a trench or No Man’s Land, so he’s being jostled every time he’s moved, and who knows what’s happening inside his body?” Banks said.Combat stress affected everyone

Crile also studied the effects of stress on the body, resulting from prolonged exposure to combat. The surgeon once wrote: “I have observed soldiers in the trenches show unusual lines of strain upon their faces, giving them the appearance of being from five to ten years older than their actual ages.”

“Crile saw that in any kind of sustained warfare, the body is put through a tremendous amount of physical stress. Which he believed was linked to neurological stress,” Banks said. “What Crile is really, in a sense, stumbling on is the precursor to PTSD (post-traumatic stress disorder).”

But Crile and members of the Lakeside Unit weren’t immune to the psychological impact of war.

One unit member, Sgt. Robert Shrimplin, of Cleveland, wrote home: “It surely is pathetic to see these fellows when they come in, covered with mud and blood, and yet with few whimpers or apparent pain.”

Nieves noted that among the unit personnel, “sometimes they found it very difficult because, of course, they saw a lot of young men being severely injured, and there were injuries we had never seen before.”

Nurses were advised “not to become too attached to some of these young men because chances are they’re not going to survive,” Nieves said.

Even Crile “did get emotional when he came back to Cleveland in 1915,” she added. “He did comment in his diary pretty much what you hear soldiers say today – You’re coming back to something to something that’s now foreign to you because you are not ducking and worrying about the next bomb exploding over your head.

“He definitely did feel there was a huge difference between what he had experience and what he was coming home to,” she said.

But, “I think he felt it was sort-of his duty,” she added.  For Crile and the Lakeside Unit, “it was a huge patriotic endeavor.”