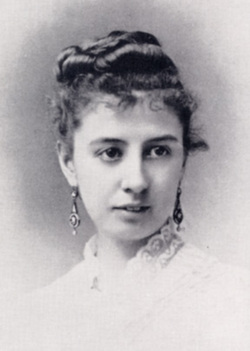 Flora Stone Mather was a philanthropist dedicated to Cleveland religious, educational, and social-reform activities. Flora Amelia Stone, youngest daughter of Amasa Stone and Julia Gleason Stone, was born in the family mansion on Superior Avenue and graduated with honors from Cleveland Academy.

Amasa Stone, her father, made a fortune in bridge building, railroads and banking. They were parishioners of the First Presbyterian Old Stone Church on Cleveland’s Public Square. Clara, her sister, and Flora belonged to the Young Ladies Mission Society.

At their church in 1863, Amasa and Julia Gleason Stone helped establish the Home for Friendless Strangers to provide assistance for refugees of the Civil War. After the war the need continued for medical care of Cleveland’s poor and in 1866 a house was bought at 83 Wilson St. which was operated by the Cleveland City Hospital Society. This marked the origins of University Hospitals of Cleveland.

On October 19, 1881, Flora Stone and Samuel Mather were married. Following a European honeymoon, they lived with Flora’s parents. Two years later, Samuel Mather helped found Pickands, Mather and Company, to sell iron ore and coal. This company became one of the largest shippers of iron ore from the Great Lakes region. It also operated coal mines and blast furnaces throughout the Midwest.

Flora continued her allegiance to her own First Presybterian Old Stone Church and also went regularly with Samuel to his Episcopal Old Trinity. They had four children: Samuel Livingston, 1882, Amasa Stone, 1884, Constance, 1889 and Philip Richard, 1894. When Flora Stone and Samuel Mather married, a philanthropic partnership emerged strongly influenced by the tradition and patterns of giving established within the Stone households.

After the suicide of her father in 1883, Flora became the dispensing hand of a large inheritance. She felt a duty to distribute the money in a way her father would have wished. In his memory Flora Stone Mather and her sister Clara Stone Hay built the Amasa Stone Chapel on the campus of Western Reserve University.

In 1884, Samuel Mather, became a trustee of Cleveland City Hospital. Two years later, he began his tenure on the Board of Trustees of Western Reserve University, continuing the tradition of support initiated by the Stone family.

In a family tradition of financial support started by her father, Flora made her first large gift to Adelbert College (built and named for her brother who died in a swimming accident) in 1888 to endow its first chair in the name of Hiram C. Haydn, her pastor at Old Stone Church and president of Western Reserve University.

In 1896, Mrs. Mather founded Goodrich House in honor of her childhood pastor, Rev. Wm. H. Goodrich, also supporting its outgrowth activities, including the Legal Aid Society and Consumers League of Ohio. Mrs. Mather supported many activities of Western Reserve University, including the Advisory Council, College for Women (renamed Mather College in her honor in 1931), and Adelbert College. Another important influence on Flora was a teacher, Linda Thayer Guilford. At the Cleveland Academy, Clara and Flora received the equivalent of a rigorous high school college preparatory course. Pupils were inculcated with the value of education, a sense of moral responsibility for the poor and a missionary spirit. In 1892 she constructed Guilford Cottage (later Guilford House), a dormitory on Western Reserve University’s campus named in honor of her former teacher, Linda T. Guilford.

The beauty of Mrs. Mather giving was that she gave so unsparing of herself. She was a frail woman all her life, yet with the urgent demands of a large house and growing children, church and community affairs, she found time to make frequent visits to Guilford House, often staying for lunch with the sixteen girls who lived there getting acquainted with them and their needs and the needs to make living there more comfortable and homelike. She brought flowers and books for the sparse library and books to individual girls which she thought they might enjoy reading.

She gave funds in 1902 to construct Haydn Hall, in honor of Dr. Hiram C. Haydn of Old Stone Church, to which Mrs. Mather belonged for her entire lifetime.

The quality and character of Flora Stone Mather’s efforts as a philanthropist reminded many of a ministry. She explained: “I feel so strongly that I am one of God’s stewards. Large means without effort of mine, have been put into my hands: and I must use them, as I know my Heavenly Father would have me, and as my dear earthly father would have me, were he here.” She was a very wise, understanding and fair woman. Mrs. Mather never put herself in the foreground. She worked through other people and never sought credit for her deeds.

Her work with the Home for Aged Women, The Children’s Aid Society, the Day Nursery Association, the Young Men’s and Young Women’s Associations, the Welfare Federation, Goodrich House, struggling schools, churches, and colleges the country over, much have meant a great tax on her strength and composure. Dr. Meldrum, her pastor said to her: “Mrs. Mather it is easier to ask you for a contribution that to thank you for it” and she replied, “That is as it should be. It is more blessed to give than to receive.”

In the 25 years before her death, Flora Stone Mather achieved a remarkable record for philanthropy. Following her funeral service at Old Stone Church, the procession moved slowly east on Euclid Avenue to Lake View Cemetery. A graduate of the Class of 1894 reported: “At last when the end came to that active and useful life . . . the students of this college stood in line on the sidewalk as the funeral cars passed by. I came to Cleveland that day and stood there too because it seemed that here, near the campus in which she showed such interest and to which she had given so much, was the place in which to say the last goodbye.”

Mrs. Mather died in 1909 at the age of 56 at Shoreby, the family’s lakeshore home in Bratenahl. Her will included bequests to over 30 religious, educational, and charitable institutions, including funds to complete Amasa Stone Chapel on the WRU campus, which she and her sister, Mrs. Clara Stone Hay, gave in memory of their father. In her will she stipulated that Lakeside Hospital, where she had endowed the training school for nurses that carried her name, continue to receive annual gifts. When the medical center moved to University Circle, Samuel Mather built a dormitory for nurses and named it for his late wife.